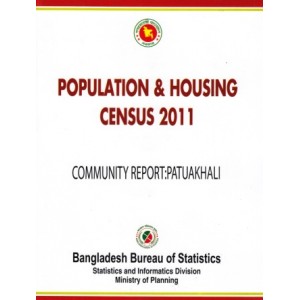 Population Census is indeed the only recognized and reliable source in Bangladesh for complete and quality database related to population size, spatial distribution and all basic characteristics of population from national level down to village. Bangladesh Bureau of Statistics (BBS) had conducted the fifth Population and Housing Census during the period from March 15-19, 2011 starting at the zero hour of 15 March, 2011. The publication of community reports for each zila is undertaken on the basis of census results to meet the demand of community level data and information. Patuakhali Zila Community Report is one of 64 Community Reports of the country.

The census results for each upazila by mahalla, mauza and village are furnished in the community report of Patuakhali zila in order to facilitate the users at various levels. Two sections of the report namely, “At a Glance” and an “Analytical Findings” will be of special advantage to the users. I believe that the classified data presented in the report will provide quality benchmark database to policy makers, planners, researchers, administrators, development partners and other agencies for formulating and implementing their plans and programs for overall development. I also believe that this report will be helpful for all users both at home and abroad. The dedicated efforts of personnel employed in census have tremendously helped for the success of census. Moreover, the participation of people at large also plays a vital role in this operation. I deeply acknowledge the active participation and commendable cooperation of all the government and nongovernment organizations, district and field administration, different local government bodies, print and electronic media of the country for making the census possible. I also express my gratitude to the European Union (EU), US Census Bureau, U.S. Agency for International Development (USAID) and United Nations Population Fund (UNFPA) for their financial and technical support for completing this huge task.

The Population and Housing Census had made best use of the modern IT technology. In order to minimize time and manpower, modern technology like ICR (Intelligent Character Recognition) machines and ICADE (Integrated Computer Assisted Data Entry) system were used in capturing the census data. CSP software was used in analyzing and processing of data. In earlier censuses, it took a long time to publish the final report following the enumeration. We had a plan to reduce the gap by publishing all reports including Community and Zila Reports for Population and Housing Census 2011, within the shortest possible time. The census preliminary report has been published within 4 months of data collection and census data for the whole country up to mauza/village level has been disseminated through BBS website within 15 months after the enumeration. I express my thanks to Director General and Deputy Director General, BBS, Project Director, Population and Housing Census 2011, members of the Editorial Committee, Editors Forum and all other officers and staffs involved in the efforts and finally bringing out this report in time.

Do you have any questions about Bangladesh Population and Housing Census 2011, Community Report: Patuakhali District?