Shaikh Maqsood Ali obtained MA (Econ) in 1956 from University of Dhaka, MA (Econ) in 1964 from University of Manchester, UK and Ph.D in 1972 from University of Leeds, UK. He taught economics at the University of Dhaka during 1957-1959. In 1959, he joined the Civil Service of Former Pakistan and served in several ministries, field administration, higher training institutions, and the Planning Commission in Bangladesh. During this period as well as after retirement (1992), he worked in several committees and commissions on planning, development and administration. In particular, he was a Member of Independent South Asian Commission for Poverty Alleviation and Convener, National Task Force for Poverty Alleviation in Bangladesh. His specialisation has been in the fields of Integrated Social Mobilisation, South Asian Values and Pro-Poor Development Paradigms. He has several publications in international books and journals on the areas of his specialisation. 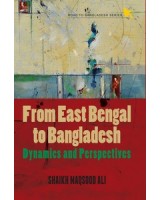 From East Bengal to Bangladesh: Dynamics and Perspectives

ROAD TO BANGLADESH SERIES is designed to present published accounts of the background to the emerg..
Showing 1 to 1 of 1 (1 Pages)