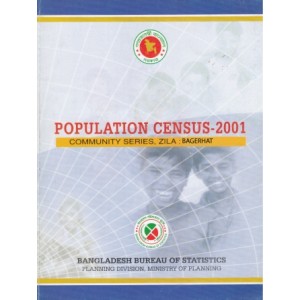 Bangladesh has a long tradition of population censuses. After the country gained Independence, the Bangladesh Bureau of Statistics (BBS) was established in 1974, bringing together the former Provincial Bureau of Statistics, the Central Statistical Office. The Population Census Organization of Home Ministry, the Agriculture Census commission and the Agriculture Bureau of Statistics of the Agriculture Ministry. The first census of independent Bangladesh was held in 1974. Subsequent censuses were conducted in 1981, and 1991. Following the decennial tradition of conducting the Population Census, the fifth decennial census was conducted from the 15th to 19th of March, 2001, which corresponds with the 1th to the 5th of Chariton, 1417 on the Bengali calendar. The main objectives of the census were to enumerate all the households and the people in the country at one point of time. As recommended by the National Statistical Council (NSC) the entire census work has three phases. In Phase I, basic information of all households and individual persons was collected using a short questionnaire designed for data capture through Intelligent Character Recognition (lCR). In Phase 2, a Post Enumeration Check (PEC) survey was conducted for evaluation of the quality and extent of coverage of the main census. Finally, in Phase 3, a Sample Census will be conducted to collect detailed information on housing, households, Population and their socio-demographic characteristics. The field work relating to Phase 1 and 2 has been completed; the field work relating to Phase 3 is expected to be completed by October, 2001. A Standing Technical Committee, comprised of well known experts in various disciplines, was formed to provide advice to the Bangladesh Bureau of Statistics on various matters relating to the Census. Two data users’ conferences were organized by the Bangladesh Bureau of Statistics, where various census data users and subject matter experts participated and exchanged there....

Table-3: Population 10 years and over by sex, marital status and married women by age group

Table-5: Population 10 years and over by main activity

Table-7: Household in dwelling unit by main source of income

Table-8: Household and population by religion and tribal population

List of personnel engaged in preparation of this report Census questionnaire

Do you have any questions about Population Census-2001, Community Series, Zila: Bagerhat?