Tomo Riba is a professor in the Department of Geography Rajiv Gandhi University Arunachal Pradesh, India. His field of interest is in Anthropogeography, dealing with the man-nature relationships and Traditional Ecological Knowledge (TEK), mostly of Tribal ethnic groups of state of Arunachal Pradesh.

During his twenty years of teaching in the University, he has produced numbers of Ph.D. Scholars and published numbers of research papers in national and internal journals. This is his second book. The title of his first book is "Tribals and Their Changing Environment".

He visited Japan twice as a Visiting Research Fellow; first in 2010 for three months in the Research Institute of Humanity and Nature (RIHN), Kyoto, an International Research Institute. During that period he travelled whole part of Japan, starting from Hokkaido, the northernmost Island to Yonaguni, the south-westernmost island. During his second visit in 2012, for six months, he devoted his time in writing this book.

Professor Tomo Riba was born in a shifting cultivator's family on 16th February 1961 in Diisi village, Basar of West Siang District, India. His father was a local shaman who used to perform rituals of the village. His mother was well versed in traditional knowledge system being a daughter of a shaman and a wife of a shaman. Her son-in-law is also a great shaman. After the death of his father, author had to help his mother in shifting cultivation at very young age under compulsion. Most of the ideas in this book are reconstruction of own experiences and memories of the teachings of his mother. Most of the information is first hand information. Thus, author knows the pains and pleasure of shifting cultivators. 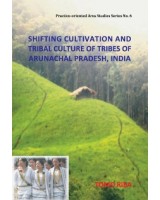 The book on ‘Shifting Cultivation and Tribal Culture of Tribes of Arunachal Pradesh, India’ has ..
Showing 1 to 1 of 1 (1 Pages)