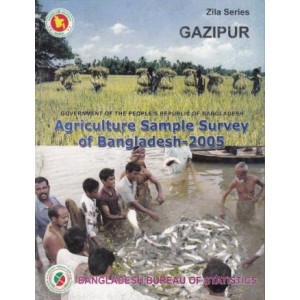 The agricultural data collected through the 1996 agriculture census became old by a decade in 2005. So it became necessary to conduct a quick national survey as per demand of the users. Accordingly, the Bangladesh Bureau of Statistics (BBS) undertook a programme oi conducting a National Agriculture Sample Survey in 2005 for fresh information relating to, among others, land ownership status, ownership of agricultural equipment. Number of persons engaged in agriculture, number and gender of head of farm households, land use pattern, crop diversification, access to credit and such other related information.

A Programme Director was posted in the month of September 2004. He arranged augmentation of budget provision for financing the survey operation very quickly with active cooperation and guidance from the Ministry, including the Minister for planning himself. It is hearkening to note that the training part of the programme was completed smoothly following a tight schedule As many as E Directors/Joint Directors acted as divisional Survey Coordinators, 25 Deputy Directors as Regional Survey Co-coordinators’ and 66 other Officers as Zila survey Co-ordinations. They constituted the batch of the Master Trainers, who imparted training not only on techniques and process of supervision but also on the techniques of editing the data for dissemination to their lower levels quickly, so as to make edited data available for processing.

Do you have any questions about Agricultural Sample Survey of Bangladesh-2005: Gazipur District?