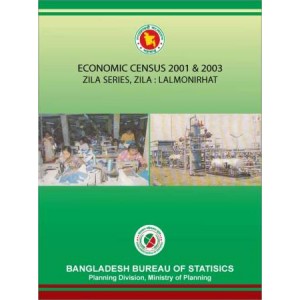 The Economic Census, 2001 and 2003 held during 27-31 May, 2001 in the urban area and during 20-26 April, 2003 in the rural area is going to be published by Bangladesh Bureau of Statistics (BBS). Currently, it is a very crucial time for the whole economy particularly textile industry, as the economy is facing the post MFA (Multi Fiber Agreement) era from January, 2005. The economy is moving forward with unforeseen challenges as well as the opportunities of globalization. The census held in the backdrop of the United Nations (UN) Millennium Development Goals (MDGs) and Poverty Reduction strategy Paper (PRSP) of the government bears particular importance. This is the second complete census and has been conducted in a comprehensive manner throughout the country. The Census collects and presents updated data and information on establishments/enterprises by structure, urban-rural breakups, major Sectors' macro and micro establishments and persons engaged by ISIC/BSIC Division, Groups and classification at 4 digit levels. It provides information about registration status, sales mode, accounting system and fixed assets at the level of establishment. For the manufacturing industries it provides information about source of raw materials, use of machinery, marketing facilities, security, environment and source of power. Total establishments increased from 41019 in 1986 to 78842 in 2001 & 03 with an annual growth rate of 4.1% with corresponding total persons engaged increased from 149391 in 1986 to 227149 in 2001 & 03 with an annual growth rate of 2.67%. The report would be useful to the & decision makers, planners, development partners, NGOs, investors, manufacturers, academicians and researchers.

Do you have any questions about Economic Census 2001 & 2003, Zila Series: Lalmonirhat?