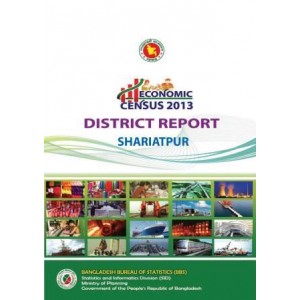 The third decennial Economic Census was successfully conducted by Bangladesh Bureau of Statistics (BBS) during 31 March -31 May 2013. It was a major statistical undertaking of the BBS that involves massive operations both at national and sub-

national levels. The main objective of the census was to know the structural changes happened over the last decade. The final results of the census were published on 31 December 2015 through a dissemination seminar and now the district reports are

published. The Economic Census 2013 was different in many reasons from the earlier ones. Listing operation of all households and establishments prior to main census was carried out in order to identify the economic units appropriately. Data entry was made at the field level using Union Information and Service Center (UISC); at the same time, the data were sent to BBS headquarters through internet. Wide-range of media coverage as well as active engagement of the stakeholders contributed notably to make the census successful. To validate the census data in regard to quality and coverage, Post Enumeration Check (PEC) was conducted by an Independent Organization, BIDS. All these efforts notably contributed to have the quality data. I believe that the data given in this district report will add significant values to enrich the local level research, planning and policy formulation.

Do you have any questions about Economic Census 2013, District Report: Shariatpur?