0 item(s) - U$0.00
Your shopping cart is empty!
Categories
Home » Shifting Cultivation and Tribal Culture of Tribes of Arunachal Pradesh, India 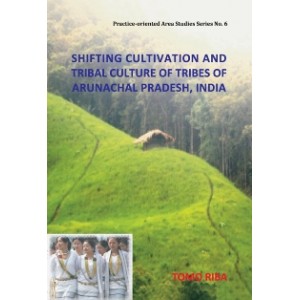 The book on ‘Shifting Cultivation and Tribal Culture of Tribes of Arunachal Pradesh, India’ has been written mainly to show how the traditional life of Tribal people of state of Arunachal Pradesh, India are very much attached to shifting cultivation. Shifting cultivation is more a culture than agriculture to these people. The beliefs and practices, art and crafts, food habit, the technique of hunting and fishing, traditional healing, food habits and even the sentiments and emotions of the people are either directly or indirectly related to shifting cultivation. The book has also mentioned how centuries of practicing same system has helped these people to learn many secret of nature, which is termed as Traditional Ecological Knowledge (TEK).
Book has mentioned how, many scholars have misconception about shifting cultivation without knowing much about it. Farmers not only cut the trees, but also grow crops and domesticate animals. They are the maintainers of crop diversities as they grow more than 30 crops. They do not use any chemical fertilizers and pesticides to increase the productivity.
It has also mentioned that shifting cultivation is practiced in the forest. In other way it can be said, shifting cultivation is there, so is the forest. They do not remove the forest permanently like agro-forestry and many other commercial farming. They fallow the forest to allow to regenerate. Secondary forest during fallow period can support more organisms due large plant diversity.
The whole book has been divided into seven chapters comprised of Introduction, Origin of farmers and farming, Beliefs and Practices, General Life of Farmers, Different Stages of Shifting Cultivation, Shifting Cultivation and Allied Activities and Conclusion.
The meaning of local terms has been given in the glossary at the end and instruction to pronounce local words is given in the front.
The book is one way of documentation of culture of shifting cultivators of Tribal ethnic groups of Arunachal Pradesh India. One day shifting will meet its natural death. The book would be of immense importance to researchers and people who had less exposure to their own society.

Do you have any questions about Shifting Cultivation and Tribal Culture of Tribes of Arunachal Pradesh, India?